Phoenix may be well known for their breathtaking sunsets and hot summers, but now the capital of Arizona is sizzling with great tastes.

I tagged along with four other traveling food bloggers in search of some of the finest cuisine in the desert.

Our quest began with brunch at Vincent’s on Camelback.

Walking into his quaint bistro on Camelback road makes you feel like part of his family. From the French detailing on the ceiling to the antique looking wooden chairs, you’ll feel at home. At Vincent’s, nothing compares to their service. It’s utter perfection. Vincent himself and his wife greeted every one of us at the table. But his sweet and moderately shy manor doesn’t resemble his bold and inspiring flavors. 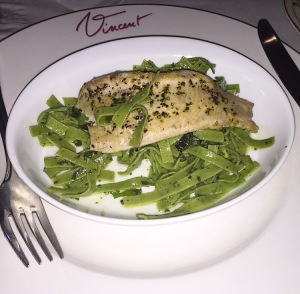 For desert we sampled nine different hand crafted delights. Pictured below are Vincent’s cheese cake and his famous hot cherry chocolate tart. Both were like nothing I have ever tasted. I wonder how Vincent creates food that leaves such lasting memories? His dishes truly embody the beauty of Phoenix.

Next on the itinerary we headed to a cooking demo at the gorgeous Desert Botanical Garden with world renowned Vegan Chef, Jason Wyrick.

Wyrick is the Executive Chef of The Vegan Taste. His story and reason why he chose to eat a Vegan diet is inspiring. He once weighted 330 pounds. After a nearly fatal neck infection he was diagnosed diabetic. Wyrick said he knew something needed to change and that he didn’t want to be on medication for the rest of his life. Today, Chef Wyrick has lost over 100 pounds and completely reversed his Type 2 Diabetes. All thanks to changing his diet. Wyrick decided to share his food creations with the world in The Vegan Culinary Experience, the first ever Vegan magazine which he created. Along with many other accomplishments Chef Wyrick has been noted by the New York Times and has one of the longest Vegan catering companies.

During his demo, Chef Wyrick taught us how to make a Cantaloupe Agua Fresca, Guajillo Peanut Lime Soup, Avocado Tomato Salad, and Black Bean Torta with Sundried Tomato Aioli. He also explained to us how spicy food can really speed up your metabolism. Embrace the Arizona heat by tossing in some spicy peppers into your next meal!

After our cooking class, we headed to The Westin Kierland Resort and Spa for dinner at their exquisite restaurant called Deseo. Before entering the restaurant we were greeted in Spanish by famous Cuban artist, Nelson Garcia-Miranda. What’s good food without experiencing creativity from all angles?

The Westin goes above and beyond in creating an extraordinary atmosphere. Along with Nelson, the resort has bagpipes played every night around 5 o’clock. The amenities at this hotel take you far away from what most people think of when you say Phoenix. Dining and experiencing this resort made me feel like I wasn’t in Phoenix at all, but rather an exclusive, exotic vacation far away from Scottsdale, Arizona.

At Deseo we were also graciously greeted by their chef.

For starters we were presented with their trio appetizer. Fish tacos, ahi tuna, and lobster.

Next, was a side dish of their shrimp. This was my favorite and I could have ordered it as my main entree. Deseo pays special attention to fine details as you can tell from the pictures above and below. Artistry is taken very seriously here so for those art buffs out there Deseo is a must travel, taste and experience destination for you. 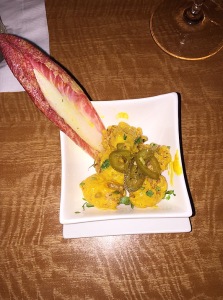 For my main meal I ordered their special which was a huge lobster with coconut and pineapple in the dressing. The side is spinach and crab rice.

There was an assortment of desserts passed around the table but in my opinion this one is definitely worth blogging about. It’s called “The Chocolate Cigar”. Completely edible, this creation has a hazelnut taste and may end up being the highlight during your stay at the Westin Kierland. It’s a must try!

I have never been so full in my life but thanks to VisitPhoenix.com I was able to explore the up-in-coming culinary scene in Phoenix. I tried a lot of things I would have never ordered before, but now, I know I have experienced new favorites! This shows that you never know what you’re missing out on if you never step out of your comfort zone and try new things. For those who have never tried a vacation in Phoenix you won’t be disappointed. With the plethora of things to do here, never let the heat of the desert keep you out of these fabulous Arizona kitchens.

Enjoying Sedona with my hubby and my little girl bouncing around inside! 💓
First comes love, then comes marriage, then comes a baby! We cannot wait to meet our precious little girl this September! Thank you God for our blessing! 🎀
The absolute best weekend with some of my favorite people! I love us! ❤️ Come visit again soon!
Wanted to share a photo of the cookies I left out for Santa! 😉Merry Christmas! 🎄
Feeling the Christmas spirit! 🎄Heading out to my hubby’s Christmas work party!
Check out our shirts!! Christian Family Care’s collaboration with @statefortyeight ! 💙